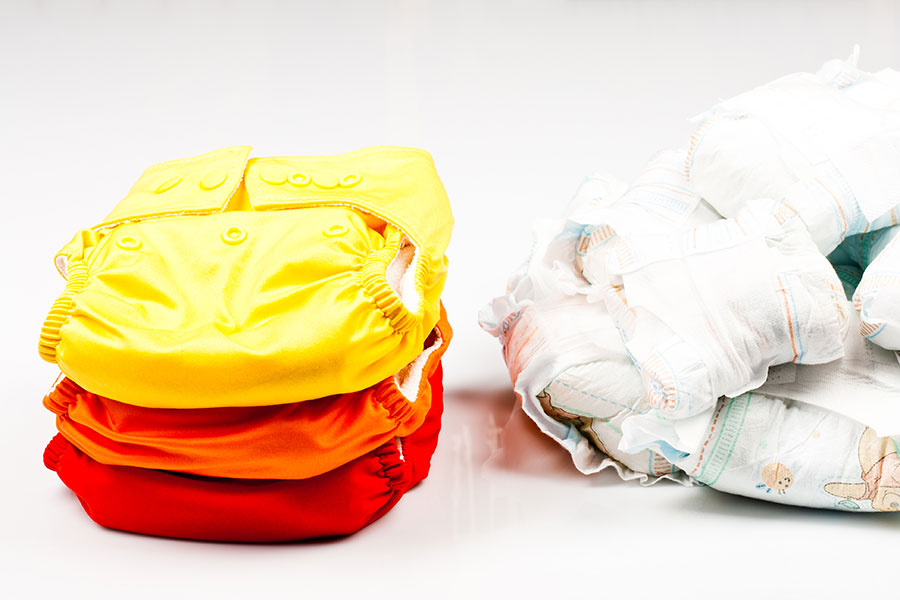 Want to save money and lower your environmental footprint? Then cloth diapers might be for you! This will give you a very brief overview (there are entire blogs specifically devoted to cloth diapering) and maybe peak your interest enough to try them yourself! Many shy away from them because the initial cost can seem daunting – ten to twenty dollars per diaper – plus the idea that they will be a lot of extra work. Though there definitely is a learning curve, once you get the basics they are nearly as easy as disposable diapers.

Before my son was born I planned on using cloth diapers for a number of reasons. I’ve always been environmentally conscious, and I had heard how much money you could save using reusable versus disposable (disposable diapers can run $2500-$3000 per child, whereas you can cloth diaper a child for as little as $200 – and reuse them all for any future children). I was not entirely sure what I was doing, so I purchased a couple of used ones from a second hand store, and bought some inexpensive ones off ebay. This was my first big mistake – the ebay diapers were cheaply made and leaked, ultimately being a waste. The second hand diapers worked better (it might seem gross to buy used cloth diapers but they clean just like regular clothes and actually hold their resale value very well). The problem then was that I hadn’t done proper research into how to get a cloth diaper system going and the first time my son went #2 in his cloth diaper, I threw in the towel (and threw out the diaper).

Which leads me to today. My son is 16 months and about a month ago I wanted to try again in hopes that I could get the process down enough to start from day one with a future second child. In less than a week we had converted to cloth diapers almost entirely. So what did I do differently this time?

For starters, before I purchased anything I found a friend who exclusively used cloth diapers with her baby and went to see the process in person (I’m a visual learner). Having her go through the different types of diapers, seeing her put them on her baby, and even how she stored them made the whole thing seem very doable. If you don’t happen to know anyone using cloth diapers – search YouTube or look for any of the dozens of cloth diapering blogs. There are great sites that walk you through it step by step (my personal favorite is Green Mountain Diapers, huge selection and detailed descriptions of each kind of diaper).

When it comes to purchasing, there is no right or wrong or better kind, it’s entirely a preference. Some have snaps, some have velcro (or “aplix” as it’s called on many sites), others go on like tiny waterproof underwear. Some are “all in ones” with the absorbent cloth part built right into the waterproof shell, while others have those two parts separate. There are ones that “grow” with the child, meaning one diaper will fit them from birth through potty training…the list goes on and on. My recommendation – find a site with a wide variety and buy one of each. Like I mentioned before, cloth diapers hold their resale value so if you really wind up disliking a certain type you can resell it. I’ve tried pretty much every kind and there are pros and cons to all of them. As a warning – once you see the ADORABLE prints that they come in, you’ll want to buy them all.

I had a few leaks early on, but almost all were due to my not putting them on correctly or leaving them on too long. Once I mastered that part though, I haven’t had a single leak; cloth diapers hold fluids amazingly well. You will be changing your baby more often, about every two hours, but you’ll find that you fall into a routine quickly. There are even cloth wipes and sprays you can use so you never have to buy another disposable wipe again. Money saved!

Another daunting part for me was how to store and wash the dirty ones. My friend informed me of the scary truth about washing cloth diapers – you wash them just like you do the rest of your clothes. Whatever detergent you are using to wash their regular outfits is fine. I read sites advocating special detergent and washing the diapers one, two, three times, each time on a different spin speed and heat setting. In the month I’ve been using them, I’ve washed them once on hot and that’s it. Now, you will be doing a few more loads of laundry a week, but to offset the electricity costs I’ve been line-drying them on a small drying rack in the backyard. The UV rays from the sun kill any bacteria, and if you’ve never line-dried clothes before, they come back smelling like lovely crisp, clean air.

If your baby is exclusively breastfeeding then you can put any and all diapers straight into a dry bag (about $15-25 dollars) and when it’s time to wash you just dump the whole load in and turn the bag inside out to wash with the diapers. I haven’t used cloth diapers with a breastfeeding-only baby, but every site says that their bowel movements dissolve in water and you truly don’t need to wash them out first. If your baby is on solids, you’ll want a diaper sprayer (hose with a nozzle that attaches to your toilet to spray waste off the diaper and into the bowl). I know it sounds like a lot of work, but it’s really not bad. I still run urine soaked diapers under the faucet for a few seconds, and then everything goes into the dry bag in the corner of his room behind his old diaper pail. I don’t have a lid or anything, I read somewhere that the more air that gets in, the less they smell, and so far his room smells just fine!

There are smaller wet bags for use when you need to change a diaper when out and about – you might already have one for if Baby messed their clothes when on an excursion. I initially was wary about using cloth diapers out of the house, the thought of carrying around a dirty diaper all day in a bag was not appealing, but you know what, it’s no big deal now.

I have to say, I feel a tiny sense of pride with every cloth diaper that I change in knowing that it’s money saved and that it’s one less diaper that will be sitting in a landfill. If you’re remotely curious, go check out an online store and buy one or two today (or even see if you can borrow one from a friend). Who knows, you might wind up a cloth diaper convert like me!

About This Blogger: Kelsey Swann
Kelsey Swann is a first-time mom to a sweet and active one-year-old boy, and wife to a wonderful Canadian import. Born and raised in San Diego, she was an elementary school teacher for ten years before making the change to Stay at Home Mommy. The opportunity to stay home has allowed her to dive headfirst into learning the ropes of how to make and store all of her son’s baby and now toddler food from scratch, which in turn has encouraged healthier eating for the whole household. When not flexing her newfound culinary muscles, this Mama enjoys flexing her real muscles in Muay Thai Boxing and at-home workouts, doing activities with her son’s playgroup, and traveling the world with her family.

The Value Of A Tattle Tale