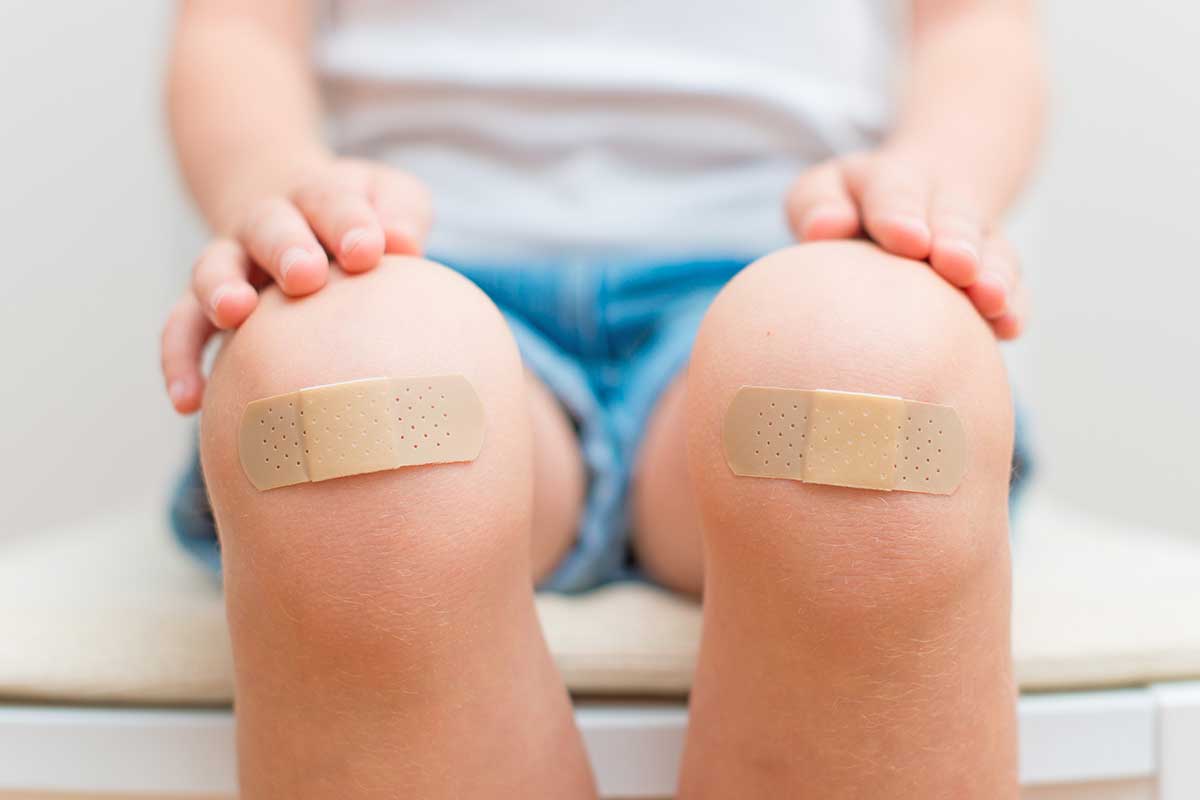 You can put latches on every cabinet, and covers on every outlet, but at some point, and possibly at many points, your child will get hurt in an attempt to explore as much of their world as they can possibly manage. Children often seem to determined to injure themselves. Last week, my mother stopped by my house with my 3 year old and 11-month old nephews. With my 5 year old, 3 year old, and 4 month old, it was a lot of kids to keep track of at once. My 2 year old immediately went and got a container of random toy parts out of his toy room- a screwdriver, a small bucket that had been taken off a toy backhoe, some miscellaneous small wheels- a great assortment for my 11-month old nephew to choke on. My older son and my other nephew went to the basement to play trains. My younger nephew picked up the screwdriver, put it in his mouth and headed for the basement stairs. What could go wrong- a fall down the stairs while holding a screwdriver? As soon as we would get one inappropriate toy away from him, he would find another.

Since we just moved recently, the toy room is not exactly organized yet, so there are all sorts of things for a small child to get into. It’s on my to-do list to get things cleaned up, since my 4 month old has been rolling over for weeks and will be getting around and into things in no time. When my younger son was a baby, my oldest was only 2, so he didn’t have a lot of toys with small parts to leave out for his brother. Now we have lots of small trains, balls of dried out playdoh, tools, and many other potential hazards lying around.

Small children getting into trouble is not a new thing. When my grandpa was little, he got to close to the fire they had the cauldron over while they were butchering a pig, he caught himself on fire and started to run. His father tackled him and put out the fire, but I remember him showing me his scars from the burns on his leg. When I was about 2, I got underneath my grandparents kitchen sink and they found me eating rat poison like candy. I was very young, but I still remember puking over the sink after they gave me the ipecac syrup. My brother once had 3 ER visits in a week from various things he had done.

My children have also done their fair share of nearly giving me a heart attack. When my oldest was a toddler, he liked to help me do laundry by pushing the start button on our dryer. One day I was doing laundry and ran some clean clothes upstairs. I heard him screaming downstairs and ran back down. From what I could tell, he had tried to start the dryer for me, and when it didn’t turn on since I hadn’t set the time for it to dry yet, he tried unplugging it to see if he could get it to work and got shocked when he had the plug halfway out of the outlet.

My siblings and I all emulate my dad’s way of having his tongue out when concentrating on something and so far, so did all our children. My middle son was about a year and a half and he slipped when he was standing next to the piano bench and hit his chin. Since his tongue was out, he bit it. I picked him up and he was bleeding all over the place. My mom was a nurse, so I called her for advice. A cool rag helped him feel better, although nursing was not so fun for a few days. It eventually healed, although he did the same thing two more times before he got a better grasp on walking without his tongue out.

Last week, my 11-month old nephew got under his parents sink, and bit the lid off a bottle of Goo Gone. Why they label lid says “childproof” is beyond me. For the most part, they just keep adults out, not children. He ended up going by ambulance to the ER. He was breathing twice as fast as he should have been. After several hours of scaring everyone over his condition, he improved and came home the next day.

Sadly, these are just some of the things that have happened in my family over the years. My younger brother was the one most often in the ER, but his son is only a few months old, so it’s too early to tell if he will take after his father with continual accidents involving fire, axes, dirt bikes, etc. It is a continual struggle as a parent to decide what you need to protect your children from and what they need to experience on their own. As much as we may wish to protect our kids, and try to take every precaution to do so, they are going to manage to get hurt one way or another as they grow up. I guess it gives us practice in realizing we can’t control everything, because one day they will leave our homes to live on their own and make their own decisions. Hopefully some day the lessons that they learn as children will help them make better decisions as adults, and we can then be scared by the exploits of our grandchildren.

About This Blogger: Kaitlyn Sexton
I was born in a small town (less than 2,000 people small, thought I would clarify since I have heard some people refer to 30,00 as a small town and there’s a big difference) in southern Michigan. I grew up on the farm my family has owned since the mid-1800s. My grandparents lived across the road from us. I love books and learning so I have taken a college class on about every subject there is, and I just got my own library in our new house. I also enjoy baking and sewing. My husband farms too, and we just moved into a farmhouse we have been remodeling for the last year. It turns out his parents went to school with my dad and our grandfather’s were friends. In a small town, everyone knows or is related to everyone else. We have 3 kids- a 5 year old boy, a 2 year old boy, and a 4 month old girl. I am homeschooling our oldest, although with his love for numbers, I often think he is teaching me. I recently completed my pre/postnatal fitness specialist certification and I am working on completing my personal trainer certification. I also sell baked goods and children’s clothes from home, when I am not refilling sippy cups of milk while wearing the baby in her carrier.

How To Get Rid Of The Pacifier