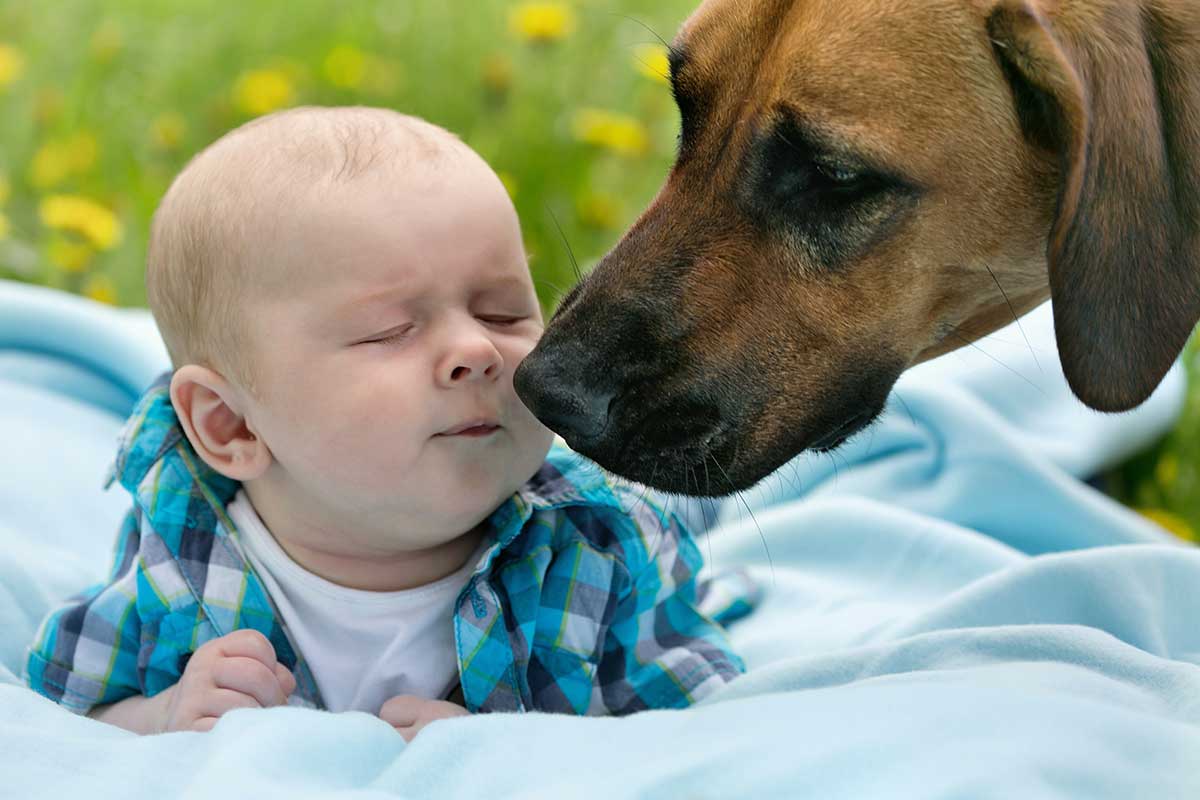 My one-year-old has been nipped at by five different dogs. Every nipping was done by a dog that the owner swore was “great with children”, “loved kids”, and “would never hurt a fly”, and occurred with my sitting no more than a few feet from him. All pets, no matter how sweet and docile, have their limits. They might get fed up from continually having to scuttle away from a determined toddler, it might be a territorial situation over food or a toy, or the pet might simply be startled by a surprise hair-grab. Whatever the reason, it’s important to educate yourself on pet safety and proper pet etiquette when dealing with others’ animals, and begin modeling these behaviors for your children early on.

My family has a twelve-year-old cocker spaniel that we take with us on outdoor excursions or walks around town. His curly hair gives the impression that he’s a puppy and he attracts lots of attention wherever we go. I’ve had children approach us, hands behind their backs, and ask from several feet away, “Excuse me, is your dog friendly to kids? Could I pet him?” at which point we can tell them he likes to be patted on the top of his head. We’ve also had many children, parents looking on, come running up squealing with laughter, hands outstretched to pet him (and a few times, grab him around the neck for a hug) as our dog stiffens and we awkwardly try to tell them with forced cheerfulness that he doesn’t really like that. Guess which one is the correct way to greet a dog? Bingo, method number one!

If your child gets excited by dogs out in public and often asks you if they can pet them (or in the case of my not-yet-talking son, frantically pointing and yelling “Doddy! Doddy! Erf erf erf!”), model for them how to correctly approach a strange dog. Like the scenario above, ask from a distance if the dog is friendly to kids, and if yes, whether they can pat them, and where the dog likes to be patted (as your children get older, guide them in asking these questions). Show them how to slowly extend one hand in a fist, fingers tucked inside, for the dog to smell. If the dog for some reason decided to nip or snap, those precious little fingers would be out of harms way. My son is too small to do this on his own, so I keep his little hand in a fist covered with my hand and demonstrate what to do. Once the dog has given a polite hand sniff, show how to give a few gentle pets where the owner has directed. Some dogs, my own included, have areas that they don’t like touched. Show your child how to keep their petting hand open and not grab onto fur, ears or tails. Never let your child grab a dog around the neck for a hug or approach a dog without first talking to the owner. Most dogs are friendly, but not all, and most service dogs should not be pet while they are working. Always ask!

When you are around your own dog, or a dog that belongs to someone you know, who vouches that their dog loves kids and is a little angel, still stay vigilant. A child might regularly roll all over a doting dog or carry the cat around like a baby, but like I mentioned before – every pet has it’s limits, and you want to ensure the pet’s safety as well. Dogs can become aggressive for any number of reasons – territorial, fear, food, or dominance to name a few – and a great way to gauge how a pet is feeling is know what to look for in their body language.

Dogs who become aggressive from fear may show signs of submissiveness – tail tucked between the legs, avoidance of eye contact, ears back, body lowered. I often see kids excitedly trail after a dog in a quest of petting it, while the dog attempts to stay one step ahead of the child, displaying the above body language signs. One of the times my son was nearly nipped was when he had just started pulling himself up holding onto furniture. My friend’s little dog was on her couch, and my gleeful son was taking shaky steps and following the dog from one end of the couch to the other. “Cupcake is fine, don’t worry”, my friend assured me, but after several minutes of my son reaching for her, she gave a little snarl and air-snapped her little jaws at him from where she sat crouched in the farthest corner of the couch. My friend was horrified, but Cupcake had had enough. If a pet is obviously not interested in being touched and seems to be trying to get away, it might be a good time to separate them (and if the child is old enough, explain that Fluffy looks like she doesn’t really want to play right now so let’s find something else to do).

Dogs who are dominant-aggressive show the opposite behavior – they may stand straight and tall, ears alert, stare intently, bark or snarl, or place themselves between owner and visitor. When visiting my brother-in-law, his dog did not like my son from the second we entered the house. She sat down very close to him and stared at him wide eyed. My brother-in-law assured us that she was around kids all the time, but within moments she had grabbed my son’s leg and then his shoulder firmly in her mouth (not a bite, but definitely a huge warning sign). We separated them for the rest of the trip. Which leads me to another point –it may seem uncomfortable to ask someone if their pet could possibly hang out in another part of the house while you’re visiting, but it will be a whole lot more awkward if an altercation winds up happening between pet and child.

Food can also be a trigger. A child may extend a food morsel to a dog and be unintentionally nipped, or be teasing a dog by holding food out and then pulling it back. My cousin was mauled by a beloved family dog doing just that as a toddler, dangling a popsicle out for the dog and then laughing as he yanked it away, and after a few rounds of this the dog lunged. Additionally, never let your child approach a dog who is eating. A simple pat on the back while a dog is mid-meal may suddenly cause the dog to whip around, snarling and snapping.

Finally – be cautious that your child doesn’t startle a dog, either by coming up from behind or waking them suddenly. Some things can’t be avoided, but talking with your children and continually modeling courteous pet behavior will help everyone be safer in the long run.

About This Blogger: Kelsey Swann
Kelsey Swann is a first-time mom to a sweet and active one-year-old boy, and wife to a wonderful Canadian import. Born and raised in San Diego, she was an elementary school teacher for ten years before making the change to Stay at Home Mommy. The opportunity to stay home has allowed her to dive headfirst into learning the ropes of how to make and store all of her son’s baby and now toddler food from scratch, which in turn has encouraged healthier eating for the whole household. When not flexing her newfound culinary muscles, this Mama enjoys flexing her real muscles in Muay Thai Boxing and at-home workouts, doing activities with her son’s playgroup, and traveling the world with her family.

Are You A Super Mom?