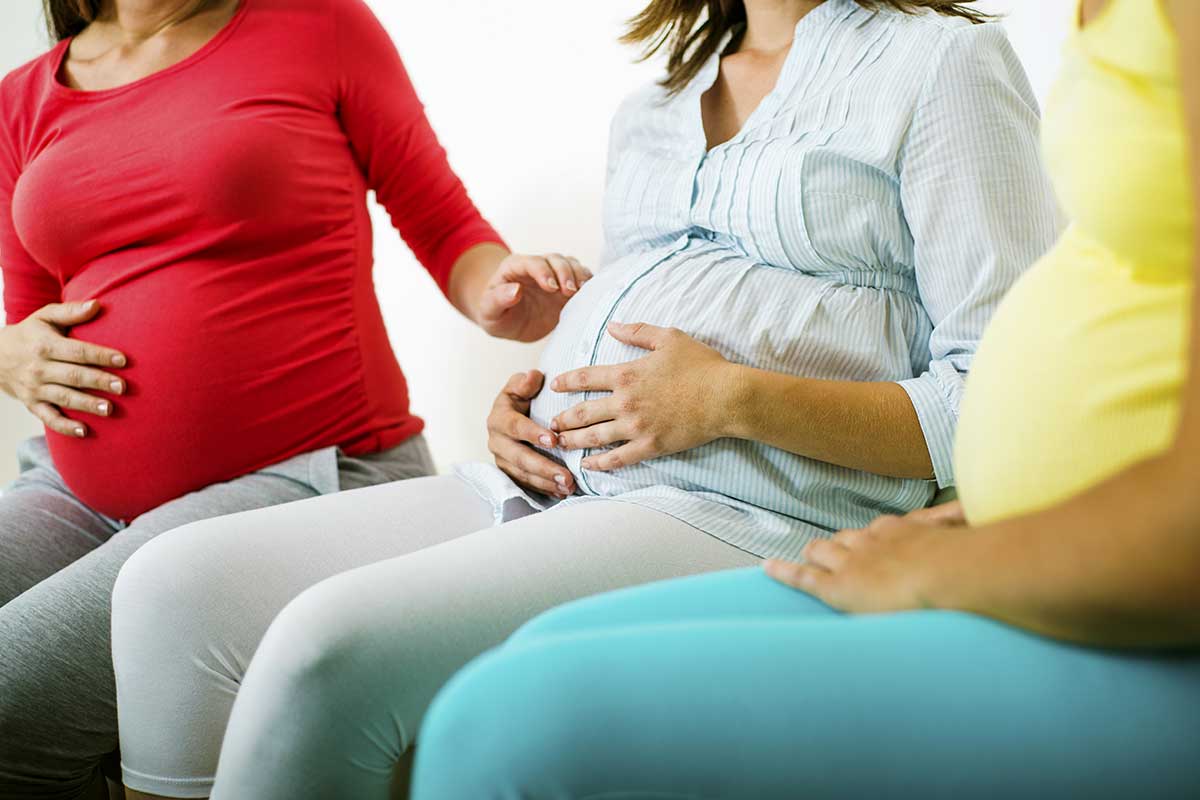 Before I got pregnant with my first baby, I read all the books and magazines I could get my hands on, but there were still things that surprised me when I experienced them. I was expecting some surprises the first time, but you would think by the third time, that I would have experienced everything by then, but there were still surprises during my recent pregnancy with my daughter.

Did you know that you will look way more pregnant by the end of the day than you did at the beginning, at least during the earlier stages of your pregnancy? Eating can make you very bloated, especially when you’re pregnant and your “food baby” can make you look much farther along than you are.

During my first pregnancy, I had a few episodes of intense pain in my abdomen. It didn’t seem to be related to the baby though. It continued after I had my son, and after a few months I found out my gallbladder needed to be removed. As I read about it online, I found out that it is very common to develop gallbladder issues during pregnancy, and I have since heard of many other women who started having gallbladder pain during pregnancy. Prior to this, I had not really given a lot of thought to my gallbladder, and I certainly had never heard that being pregnant might lead to it needing to be removed.

With my first pregnancy, I didn’t have too many problems with my joints hurting until I was fairly far along, but by my third pregnancy, it was pretty much as soon as I found out I was pregnant that I started feeling like I was 85. I would get up out of a chair (not an easy thing by the end), and then have to slowly straighten up. Exercise helped, but I did not enjoy my preview of old age.

During pregnancy, you have all kinds of strange things going on “down there”. A lot of women tend to feel wet all the time, and it’s not really fun wondering if you’ve peed your pants or not, since that is also a distinct possibility. Some women have been surprised to discover that the angle of their vagina has changed after pregnancy. One of the most bizarre feelings is when the baby punches you down there. It is both painful and very…odd feeling. After the baby drops, there is also the feeling that you have a bowling ball between your legs, which makes walking very uncomfortable.

When you are pregnant, the pressure on your abdominals can push them apart, causing what is called a diastasis. There are some prenatal and postnatal exercise DVDs that will tell you about diastasis recti, and what to do to avoid making it worse, and then how to help heal it postpartum, but I have been surprised at how many make no mention of it and promote exercises like planks that will make it worse if you are unaware you shouldn’t be doing them. A lot of women wonder why they have abdominals that still appear pregnant long after their baby is born, despite exercising. A diastasis is often the reason why.

I had pictured the placenta coming out as being an easy process that I would barely notice. It probably is that way for many women, but apparently not for everyone. With both my first and third babies, it involved a lot of …digging, in what was obviously a very painful area, since I had just given birth. I certainly would not wish that on anyone. I would like a 4th child, but I’m really not enjoying the thought of going through that again.

The middle school sex education class tells you how you can do your normal activities during your period. That is not the case for postpartum bleeding. It can last for weeks, and if you do too much, especially at first, you will bleed more. I didn’t have too much of a problem with my first two babies, but with my third, it was a lot harder to rest more. We were remodeling a house and getting ready to move, so I was home alone with our 4 year old, 2 year old, and newborn most of the time, and when I wasn’t home, we were working on the new house. Not exactly a recipe for rest.

I had always pictured breastfeeding being easy, and in a lot of ways it is. I haven’t really had any issues with supply and my kids grow like weeds, so I haven’t had to worry about supplementing or anything. However, the first few days are still toe-curling and painful when the baby first latches on. I would suggest making sure the baby has a good latch every time you nurse, because I didn’t pay much attention to that with my first baby, and it stayed painful much longer than when I was more careful with my second two. I would also suggest a good nipple cream. I am very prone to thrush, and it has taken me months to get rid of it with each baby. There is nothing more fun than trying to get a syringe full of nasty tasting medicine (I would know since I was taking the same delightful cherry-mint hand soap flavor myself) into a tiny baby. I love the gallons of yellow colored puke that would go everywhere when I gave that baby more than a tiny amount at a time. I even had to bathe my daughter in a restaurant bathroom sink once after she threw up the medicine all over herself. The extra diapers and clothes were in the truck too and I was in the bathroom with my non-verbal 2 year old, so there was no one to send for help. I did have a burp cloth that I used as a towel and luckily a woman came in to use the bathroom and was willing to go find my husband so he could bring us clothes and a diaper.

Becoming a mother makes you have to come up with all sorts of inventive ways to do things because you have to solve problems you never thought you would face. It also makes you realize the kindness of strangers. For every “you certainly have your hands full” that I hear as I go into the grocery store with all three kids (once I heard that twice before I made it in the door), there is someone who offers to load my groceries into the back of my car, or to put the dog food bag on the bottom of the cart for me when I have my daughter in her carrier. I hope that one day I can also be the one helping people out as they are entering and in the early stages of the crazy journey that is being a parent.

About This Blogger: Kaitlyn Sexton
I was born in a small town (less than 2,000 people small, thought I would clarify since I have heard some people refer to 30,00 as a small town and there’s a big difference) in southern Michigan. I grew up on the farm my family has owned since the mid-1800s. My grandparents lived across the road from us. I love books and learning so I have taken a college class on about every subject there is, and I just got my own library in our new house. I also enjoy baking and sewing. My husband farms too, and we just moved into a farmhouse we have been remodeling for the last year. It turns out his parents went to school with my dad and our grandfather’s were friends. In a small town, everyone knows or is related to everyone else. We have 3 kids- a 5 year old boy, a 2 year old boy, and a 4 month old girl. I am homeschooling our oldest, although with his love for numbers, I often think he is teaching me. I recently completed my pre/postnatal fitness specialist certification and I am working on completing my personal trainer certification. I also sell baked goods and children’s clothes from home, when I am not refilling sippy cups of milk while wearing the baby in her carrier.